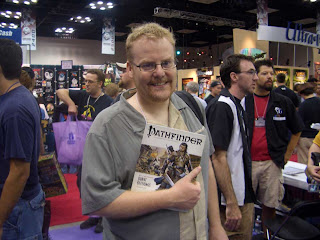 Change of Plans:
Last week I decided that I would leave my contract position with Wizards of the Coast. I am no longer working on Dungeons & Dragons, although I may provide occasional consultation in the future. My decision is one based on differences of opinion with the company. However, I want to take this time to stress that my differences were not with my fellow designers, Rob Schwalb and Bruce Cordell. I enjoyed every moment of working with them over the past year. I have faith that they'll create a fun game. I'm rooting for them.

Due to my non-disclosure agreement, as well as a desire to keep things on a professional level, I have no intention of going into further detail at this time. (Mostly, I just hate drama, and would rather talk about more interesting things.)

As for what I'll be turning to next, I hope you'll stay tuned. I plan on having an interesting announcement in that regard in the near future.